In this case study [Fru06], we use probabilistic model checking to analyse the contention resolution protocol CSMA-CA in the recently published international standard IEEE 802.15.4, which defines the lower network layers for ZigBee.

We model the protocol using probabilistic timed automata (PTAs), a formalism that supports dense time, nondeterminism, and probabilistic choice. Using the digital clocks approach presented in [KNPS06], we obtain a finite (integral-time) Markov decision process model of the protocol. Using different variants of this model, we verify the correctness of the protocol, compare the main operation modes of the protocol, and analyse performance and accuracy of different model abstractions.

In order to allow guaranteed time slots for low-latency applications and applications requiring a specific data bandwidth, IEEE 802.15.4 networks can choose to synchronise their communication according to a superframe structure, as shown in the figure below. Each superframe consists of 16 equally sized slots and is bounded by network beacons, which are periodically broadcast by a designated coordinator device.

All values refer to the physical (PHY) layer, taking into account an additional six octets (an octet is a grouping of eight bits) needed to transmit a frame that has been received from the media access control (MAC) layer.

When more than one station attempts to transmit a frame at the same time, a collision occurs, and subsequently all frames get corrupted. The standard mechanism for contention resolution in computer networks is called carrier-sense multiple access (CSMA). CSMA algorithms attempt to break symmetries of failing transmissions being restarted at almost the same time by using randomised binary exponential backoff procedures. While wired devices can listen during their own transmissions and employ CSMA with collision detection (CSMA/CD), stations in wireless networks usually cannot listen to their own transmissions, and consequently colliding transmissions can only be detected after they have been completed. Thus wireless devices use CSMA with collision avoidance (CSMA/CA or CSMA-CA).

In the past, probabilistic model checking has been applied successfully to the contention resolution protocols in the standards IEEE 802.3 Ethernet (CSMA/CD) [KNSW04] and IEEE 802.11 Wireless LAN (CSMA/CA) [KNS02a].

The CSMA-CA algorithm works as follows:

The probabilistic timed automata models for the channel and a station are shown in the figures below. In the channel model, the integer variables c1 and c2 describe the status of frames being sent by the corresponding station. A value of 0 describes that nothing is being sent, 1 represents that a frame is being sent correctly, and 2 expresses that a frame is being sent, but the transmission has been corrupted. The events send and finish describe that the respective station has started or finished sending.

The station model describes a station in the unslotted mode as described in the previous section.

Performance and accuracy of model abstractions

In this experiment, we analyse the impact of various modelling decisions on model checking performance and accuracy of results. We consider different parameters for operation mode (unslotted and slotted), modelling of the data frame length (fixed or nondeterministic), and granularity of the timescale abstraction.

In this experiment, we analyse the minimum probability of both stations successfully completing their transmissions. 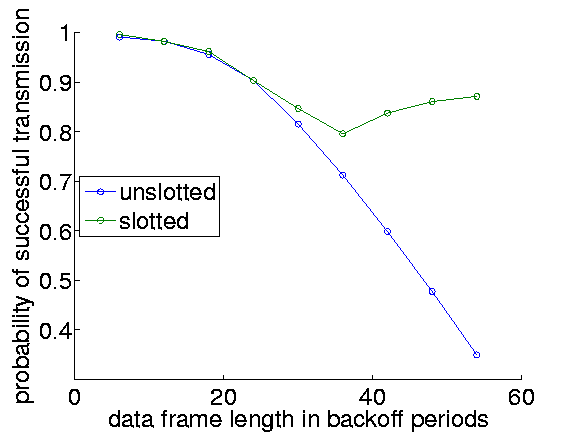 Expected number of collisions before a succesful transmission

In this experiment, we calculate the maximum expected number of collisions before both stations have successfully completed their transmissions. 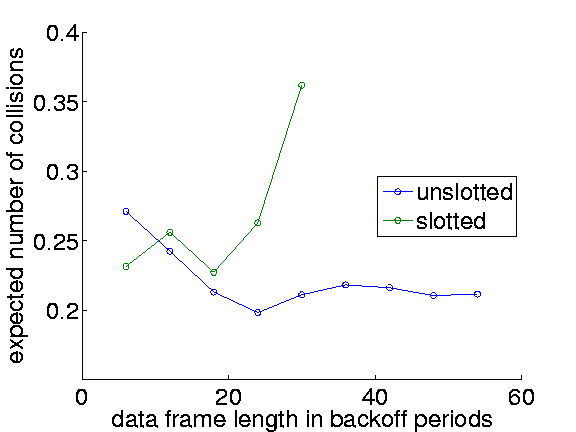 In this experiment, we calculate the maximum expected time until both stations have successfully completed their transmissions. 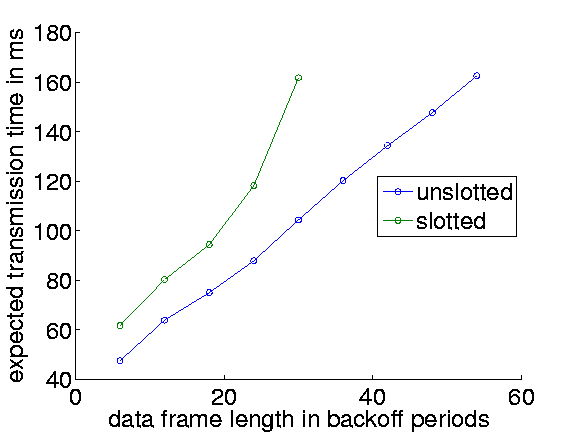